As you all might know by now, Microsoft have started rolling out the Skype for Business client over windows update as well as a standalone update. The patch is called KB2889923 and once installed, the client UI can be switched from Lync 2013 in to Skype for business, There are couple of ways to get this update. One is to run windows update on the client PC which will pick the update up from Microsoft. Add the other method is to download the standalone update package and install it on the client. The update can be downloaded from here I took the long path and ran windows update on my PC that picked up the update as expected and updated the client. 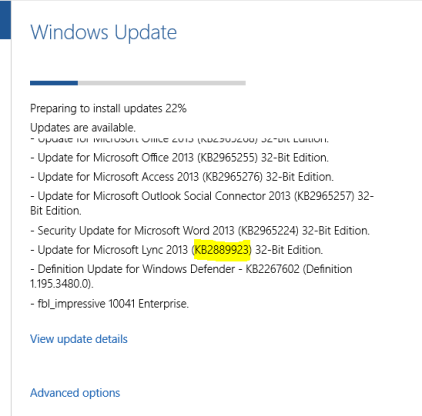 Once the client got updated, it will immediately complained that the System Administrator only allowed to use Lync UI and not the Skype for Business UI. Upon restarting the client, it reverted back to the Lync 2013 client, 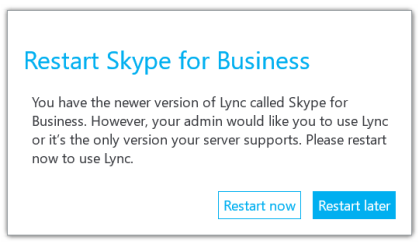 So, to allow the Lync client to work instead of Skype for Business client, it needs to be enabled within the client policy which the user is assigned with. To have the “EnableSkypeUI” policy entry, the Lync Server 2013 platform should be running on no earlier than November 2014 CU update. Since Microsoft override the current CU with the new one in official download page, the latest Lync Server 2013 update can be downloaded from here. Once the server is up to date, create a new client policy as “Enable Skype UI” by running the command “New-CsClientPolicy -Identity “Skype UI Enabled“. The reason behind not enabling the feature for the Default client policy is that, if it enabled for default, it will get rolled out for the entire client fleet and it will end up in massive confusion. It’s always better to create a new User based client policy and assigned to users who suppose to have the feature turned on. Once the new client policy has been configured, run the command “Set-CsClientPolicy -EnableSkypeUI $True -Identity “Skype UI Enabled“

Now we have the client policy configured to enable Skype for Business UI, the policy need to be assigned for the users who required to have the feature turned on. This can be done either from the Lync Server Management Console, 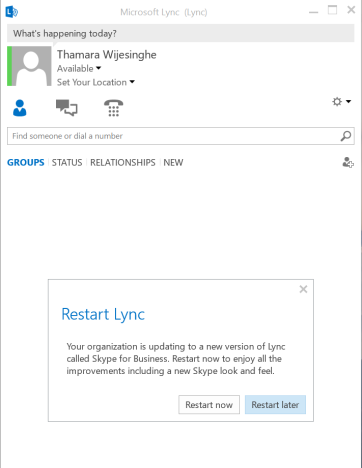 Upon restarting the client. It will start as the Skype for business client and full features and functionality which designed to be delivered from client end will be available to use despite the fact that the back end server is still Lync Server 2013. 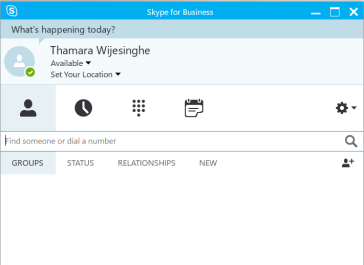 That’s all is there to know about rolling out the Skype for Business client within the organization that running with Lync Server 2013 back end servers. It’s all about planning the roll out properly and managing the client policies properly so that it will not end up in a confusion. The same setup is available for O365 Skype for Business (Lync) online. Please use the official Office Blog here which explains how to do the switch over from Lync 2013 to Skype for Business.