Polycom have recently (few months ago) introduced the firmware upgrade version 5.7 for their VVX range devices. This firmware includes few of most wanted features for Skype for Business. Some of them are;

Also, they have introduced a change to the DID number display on the device. This was an enhancement feature put in to VVX devices, when used with Skype for Business. In Polycom’s words; 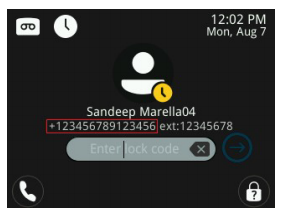 But, that’s on the Lock Scree. When it installed on a VVX 3xx device, it was looking like this on an unlocked device;

When a standard user SIP URI is like sip:+618xxxxxxxx;ext=xxxxx where only 4 digit extension configure, it would have been fine.

But when the extension get lengthier than that, the DID number starting to get disappear to make room for additional digits in the extension. This looks really bad and confusing for the users who are using the device.

After escalating this further, Polycom have came up with a solution for this in their new firmware version 5.7.1. They have introduced a configurable option to change the number display, the way that the administrator wants.

The down side for this, is that a Provisioning server is required to fix this. If a provisioning Server already exist, then setting the below code in a configuration file will fix the display of the number to just to display the DID number. And not the full URI with the extension.

Once this is configured and pushed in to devices, the number display will change to set as below;

The display is way better with proper E.164 formatted DID number.

It’s a fairly straight forward fix for the environments that already have Provisioning server deployed. For others, not so much 🙂