Unlike Lync Server 2010, Lync Server 2013 has Monitoring and Archiving servers inbuilt on Front end server and cannot be moved to a separate server. It’s still require a back end database to be configured as a data store. Apart from that, Mobility services and XMPP Server also included in to the Front End Server.

One of the key feature that changed from Lync Server 2010 is the feature availability when a primary server failure. Unlike the Lync Server 2010 Server, the Front End server keeps a full copy of the CMS in it’s own SQL Express database supporting full set of features to the end users in case of a primary server failure. In Enterprise edition, If the back end SQL Mirror is configured with a Witness, failover will be automatic and it will not require any involvement of the System Administrator. But if there’s no Witness, System Administrator must failover the Management store database within 30 minutes. If not, end users will go back to limited functionality. In Lync server 2013, SQL Cluster is not supported anymore 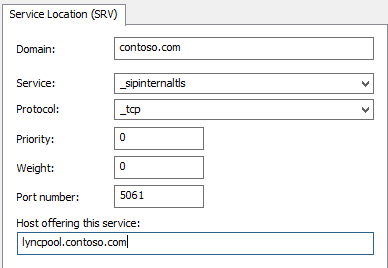 Now to prepare the Application Server that hosts Lync Server 2013 Front End server. Unlike the Lync Server 2010 Front End Server, the Hardware and software requirement is deferent. Due to the fact that there’s more server roles are collocated in Front End server, there hardware requirement is relatively higher than the 2010 Server. Visit the official Technet article http://technet.microsoft.com/en-us/library/gg398438.aspx to get an idea of supported Server OS and Hardware platforms.

Restart the server after running the script. 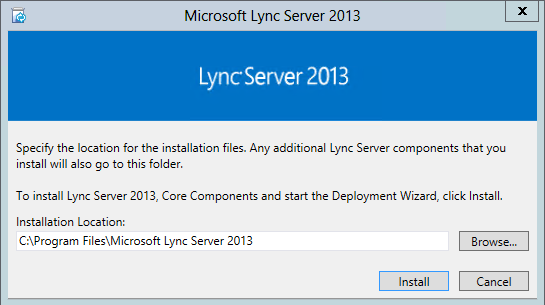 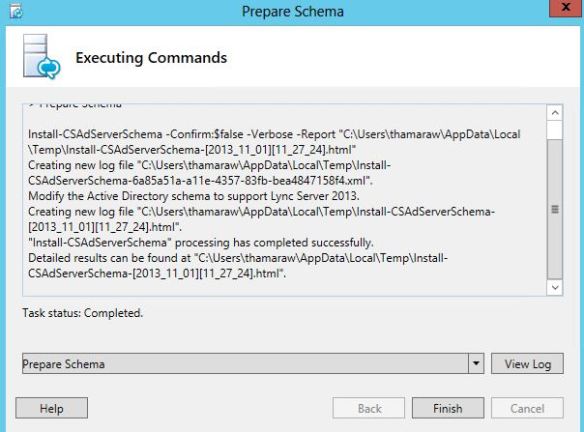 Based on the size and number of Domain Controllers on site, let it to replicate for a while and then proceed with the Forest preparation.  Note the prerequisite for this step. The user account that logged in to perform this tack must be in  Enterprise Admin/Domain Admin security groups and the Forest functional level must be over Server 2003

Select to run the step for the local domain. If there are any other domains that need to be prepared, this step need to be run against all domains separately. 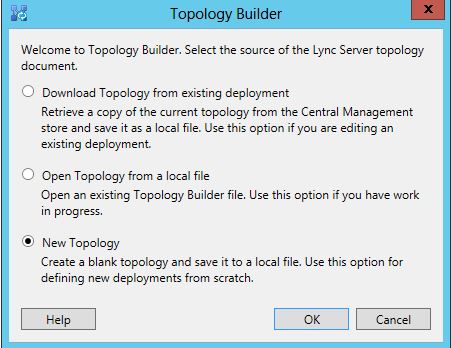 Configure the Primary SIP Domain. This is usually the domain that the Servers are configured in. Any number of additional SIP domains can be added later.

Now to configure the Site. Enter the site information.

Configure the Front End Server pool. Click on Next to begin.

Configure the Pool FQDN for the Enterprise Edition server pool 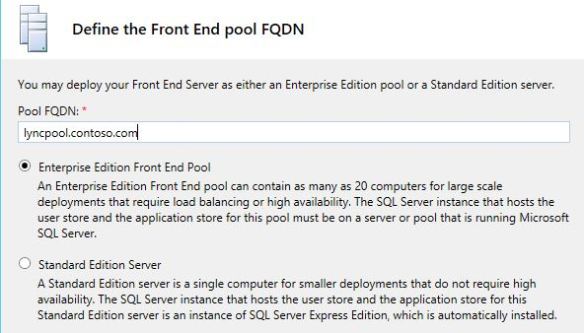 Configure the features that need to be added to the deployment. Notice that the Conferencing Servers cannot be moved out from Front End server farm. 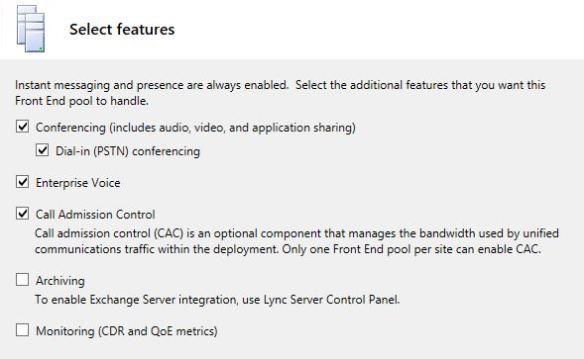 The mediation Server is default collocated. But it can be moved in to a separate server.

Configure the Edge servers that are included in this deployment. At the moment there are no Edge Servers configured. 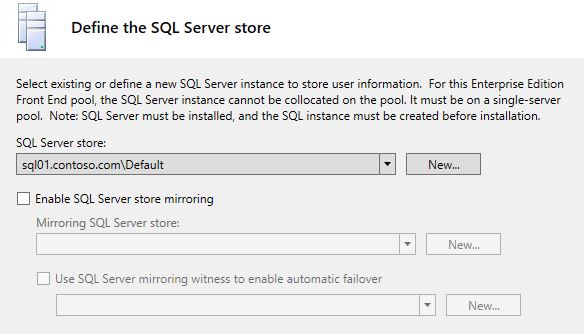 Define the File Store. In Lync Server Enterprise Edition, the file store cannot be collocated in to any of Front End servers. for this setup, the file store is configured in SQL Server. 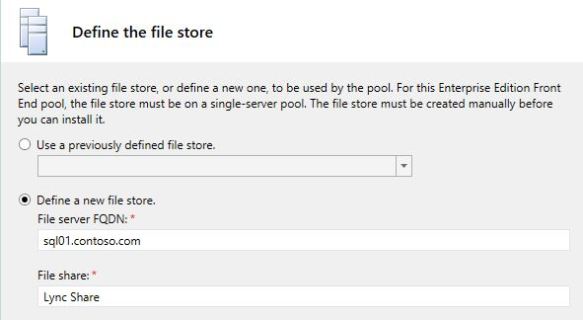 Now to configure Web Services URL, The internal Web services URL must be override if a Load balancer is configured.

Office Webapps Server is another new addition for Lync Server 2013 platform. WAC server is used to share Powerpoint Presentations in a conference. Configure the FQDN of the WAC Server. 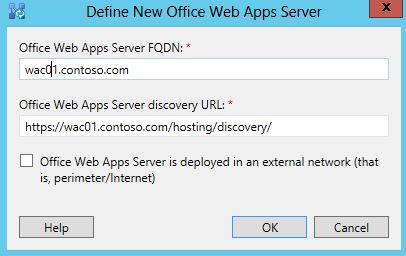 Associate the WAC Server to the Site Topology

Once done, go back to the Site Properties and configure the Admin URL and set the Central Management Server.

Double check the FQDN s and configuration to make sure that all configured correctly and properly. Publish the topology. 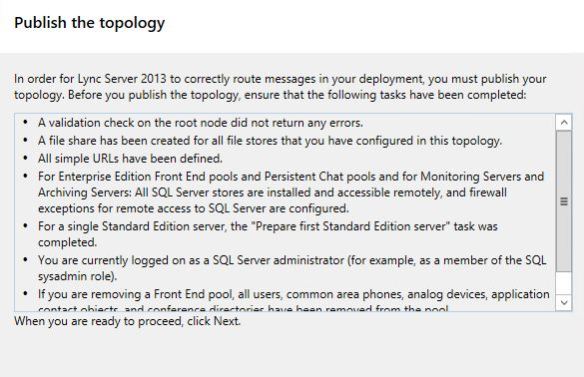 Central Management server was already set. Click on Next to continue.

Check the SQL store. Click on Advance to set the Database paths if the default paths need to be changed 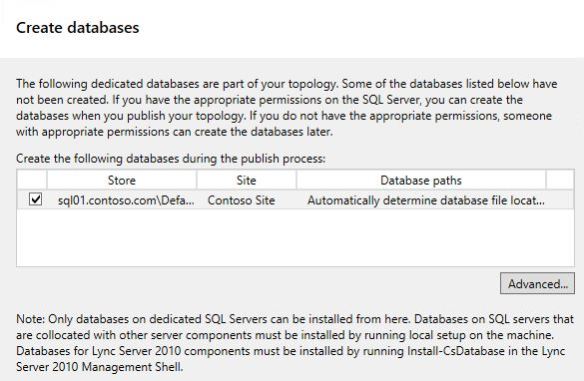 Proceed with the Topology Publish. Ignore the Warnings as it’s expected. 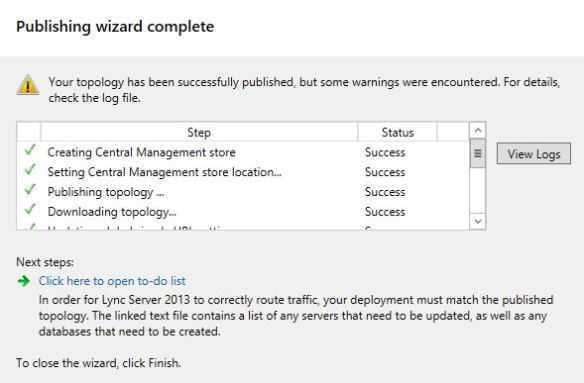 Now to deploy the services in Application server. Jump in to the Server and run the Lync server 2013 deployment Wizard. Select to Install or Update Lync Server System

Select to Install the Local Configuration Store. Notice the Prerequisites.

Select to retrieve the Local Configuration Store from the Central management store.

Select to Setup or Remove Lync Server Components. Click on next and continue with the deployment.

Step 2 successfully completed. Now to move in to the Step 3.

Select the OAuthTokenIssuer certificate first. Proceed with the request

Select to request the certificate immediately from the Local Certificate Authority 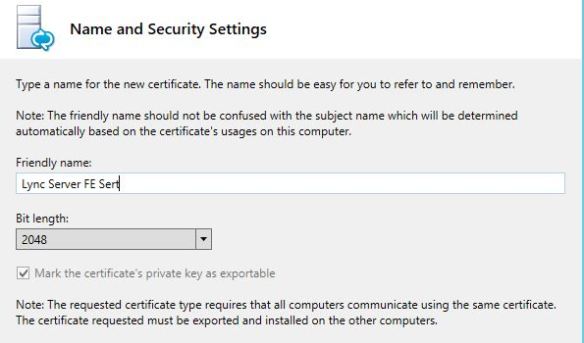 Once the request is done, Assign the certificate. 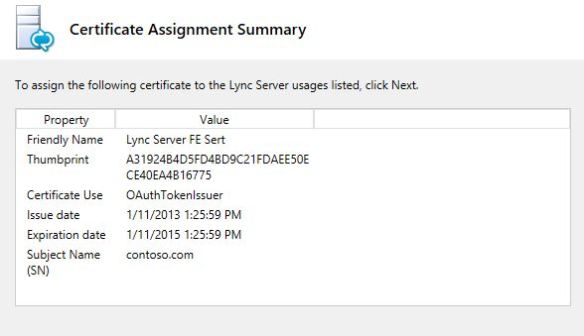 Now to request and assign the Lync Server Default Certificate. Proceed with the request.

As the previous certificate request, select to request the certificate from the Internal Certificate Authority. Mark the Private Key as Exportable. 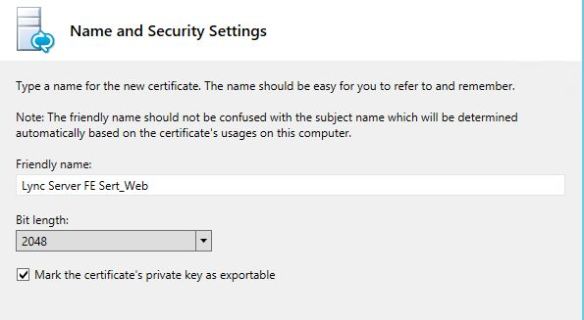 Proceed with the certificate request and notice the SAN records. Verify that all the required SAN records are there. 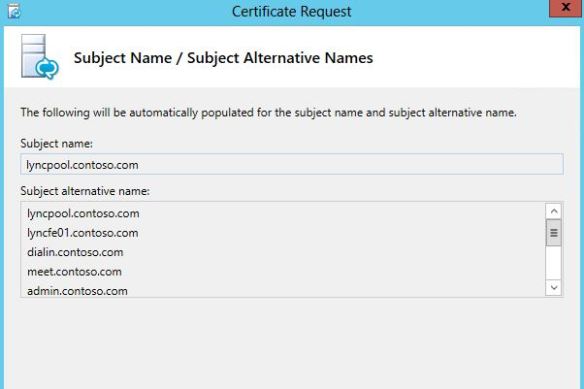 Check the SIP domains that this certificate suppose to cover and proceed with the request. 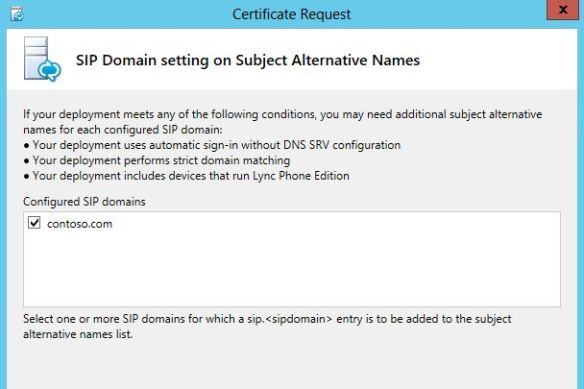 Once the request is done, Assign the certificate as Lync Server Default Certificate

All certificates assigned and looks green. 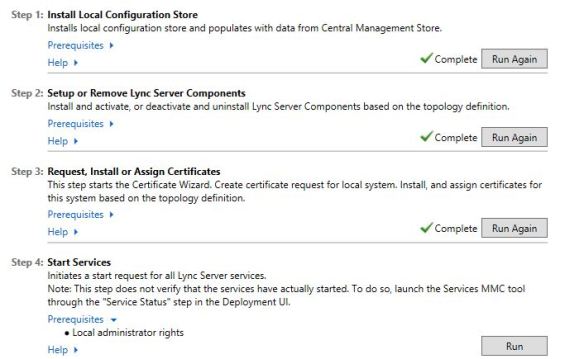 Open Windows Services and verify that all Lync Server related services are started successfully. If some of the services are still starting, give it some time to complete 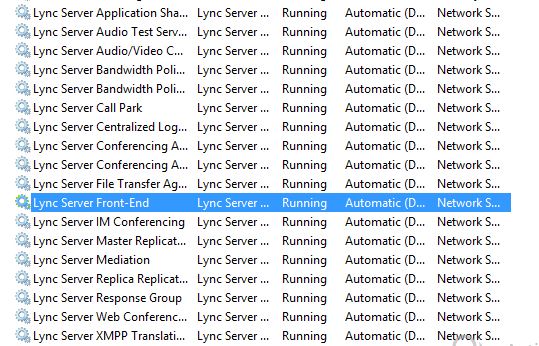 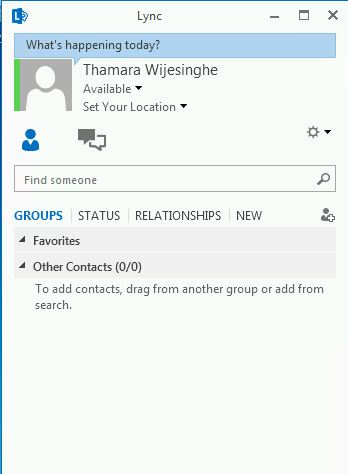 Client was able to signed in successfully. The Lync Server 2013 deployment is complete.