Typically, Call Queues and Auto Attendant services needs a “Service Number” that acquired from Microsoft to be associated with these services. This is fine if the deployment is a “green field” deployment and no numbers have been published outside. But, using services numbers will be challenging when moving on on-premises platform to Teams or SfBO as already published numbers need to be changed.

In this article, i’m going to explain how you could retain the existing published hunt group numbers and move to SfBO, using Cloud Connector Edition. This article only applies to;

**This article does not applies to Direct Routing with Microsoft Teams.

Then select the “Legacy Portal” option (Enterprise Voice related components have not yet migrated in to the new Admin portal). In Legacy Portal, go to “Call Routing” section.

Click on “Add New” to create the new Call Queue. Set a name for the Call Queue and select the domain. Note down the domain that you have used as it will be required later on. Set the call distribution method the way you want and the AD group that contain the users who will be participating in the queue. Save the configuration when done. 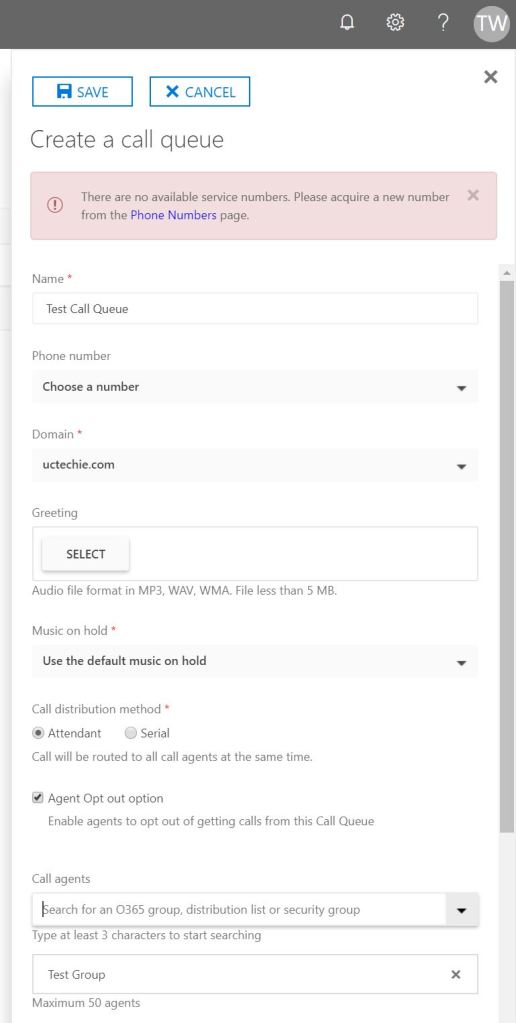 Once the object is created, note down the user part of the SIP URI of the object. We will be using this in AudioCodes gateway.

So the O365 bit is done. Now, log in to the AudioCodes SBC. In the SBC, on the IP Group that was created for SfBO, configure the domain that you have selected above, in to the “SIP Group Name” field. This is important as this domain name will override the host component of the INVITE request that goes in to SfBO. If the domain mentioned in here does not match up with the domain that was selected in Call Queue, the the call will fail to connect. 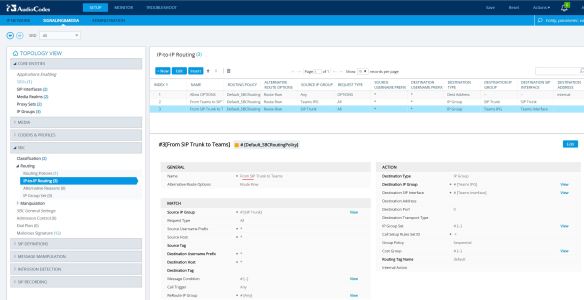 The configuration is completed now. When anyone outside calls the number +61893231234, the call will land on the Call queue. There were no Service number used for this configuration.

With the recent BEAST and POODLE attacks and having to support weak cryptography, Transport Layer Security (TLS) versions 1.0 and 1.0 are soon to be depicted and calling as End of Life and support from most of web based platforms within this year.

This will not going to be a major issue for most new platforms as they use “Modern” TLS protocol version 1.2. Once of those platforms that re deprecating older TLS versions are Microsoft 365.

What’s that got to do with LPE devices?

Unfortunately, LPE devices only understands TLS 1.0 and nothing else. With the deprecation of older TLS versions from Microsoft 365, the organizations that use LPE devices with Skype for Business Online (SfBO) will eventually stop registering users in. This will be a major problem organizations and individuals who fell in love with those devices.

What classifies as LPE devices?

There are 2 versions of devices that can be used with Microsoft Lync\Skype for Business platforms.

Ones that are called “Optimized” are the devices that contains Microsoft built firmware version. These devises also called Lync Phone Edition or LPE devices. Microsoft manage the operating system (Windows CE 6.0) goes in to these devices, even though it get built by 3rd party vendors. Classic examples of these are Polycom CX series, HP 41xx series and Aastra 672x series

On the other hand, the “Certified” ones are the devices that are built and supported by the 3rd party vendors them selves. In other words, they build the device and build the firmware that goes in to them. Since Microsoft have decided to deprecate old TLS versions, they will most probably not release a firmware update to these devices to allow TLS 1.2.

Not every device out here get endorsed as Microsoft Certified Device. These vendors\devices need to go through a certification process (3PIP) at Microsoft, which allows the devices to be certified to function with Microsoft Lync\Skype for Business platforms. So far, there is Polycom VVX series devices, Yealink, AudioCodes and Spectralink devices that carries the “Certified” banner. Certification information for these devices can be found here

What should i do?

Assuming that Microsoft will not come up with an update for their Windows CE 6.0 platform, you should think about replacing all LPE device with any of Certified devices. You can select any of devices that i mention above as a replacement for current LPE device. They are packed with features and more “configurable” than the LPE device.

I only have an on-premises deployment. Will this effect me?

Not really. TLS version control of on-premises server are up to local administrators to manage. As long as TLS 1.0 and 1.1 is not been disabled from Lync\Skype for Business Front End servers, the LPE devices will continue to work.

But, having those old TLS versioned enabled in servers are making them vulnerable to attacks. Also, Microsoft will not be releasing any new firmware updates for these devices and they will eventually be unsupported and end-of-life. It’s your best interest to get rid of these devices and replace with newer Certified devices.

There are some vendors like AudioCodes and Yealink have started to provides LPE replacement offers for organizations that has large number of LPE devices. It is a good opportunity to grab one of these offers and replace the old LPE fleet of devices.

I hope the message is clear, 31st October is the cutoff date to replace all LPE devices that are used with Skype for Business Online. Look for replacement and get it done soon. Clock is ticking 🙂

The PSTN calling plans for Microsoft Phone System (AKA Skype for Business Online) and for Microsoft Teams is finally here for Australia. Here in Australia, we call it as “Telstra Calling for Office 365”.

It is bit different to how the service offering was done compared to other regions such as Americas and Europe. For Australia, if any organization wants to use Microsoft Phone System with Cloud PSTN, then they will need to directly engage with Telstra or, talk to one of the Telstra partners that are authorized to provide the service.

However it is, the service is now available to use and lot of small to medium organizations was waiting for this to be available to complete their cloud migration goals. Since the announcement of service availability, few organizations are already lined up to register and many more to follow. It’s going to be busy and exiting months ahead.

For more information about the service, visit the Telstra web site.